Where will they take me?

I've always wanted to write a book or two. The good news is that today, we can self-publish e-books with minimal cost, and this would be a great way to start.

So, I have resolved to write an initial e-book about Nojiri, a lake in Nagano prefecture, Japan, where many of us "gaijin" (foreigners) spent a few weeks (or more) each summer, as an escape from the oppressive heat and humidity of the metropolitan areas of Tokyo or Osaka.

While I am really hoping to collect stories from people who were there (or who still make the trek), I am prepared to start by making a smaller e-book of my own stories and pictures... and perhaps use this to get other potential authors interested in contributing their own stories.

If you have been to Nojiri and if you are interested in contributing, please contact me!!! I have a page for it on Facebook, and at my Norjiri Book Site.
Posted by bakagaijin at 2:29 PM 1 comment:

Image via WikipediaMost of my ancestors came to North America from Europe in the 18th century. By comparison, my wife's family arrived much later. Her grandparents migrated from Poland, and from Sweden and Norway. Since the connection to these places is still "fresh," we intend to take a trip and see some of the places I've uncovered in researching her family tree.

The Polish ancestors have been a bit difficult to trace. If there is any advice I can give about family history, it is to try to drag the stories from your older family members before they pass. Once they are gone, the stories are gone with them, as is a wealth of knowledge locked in their heads. In Nancy's case, her Polish grandparents were already dead by the time I started my research, and getting information (especially documentation) from her parents' generation has been difficult. We knew the general area of Poland, but localization was a challenge.

Poland has an interesting history. While there have been ethnic Polish people for many contiguous years, the country of Poland been in and out of nationhood, and the land has been ruled by Austria, Germany, Lithuania, Russia, and even Sweden at one time. You can imagine what that does to written history and recordkeeping. Through documents like Church records and Military records, we were finally able to identify the ancestral villages of her grandparents. One is a town called Krusza in Northeastern Poland near Turosl. The other is the small villiage of Kalety, ethnically Polish but located in the extreme northwest corner of the Republic of Belarus, near the border of present day Poland and the town of Sejny. This area had a large Jewish population at one time, and we often wonder if the family had a Jewish connection.

We would like to visit Poland, and see Krusza, at least, in addition to doing the touristy things in Warsaw and Krakow... and maybe extend this to some of the other former Eastern Bloc countries... particularly the Czech Republic and Hungary. Getting to Belarus may be a bit more of a challenge, considering the current political climate.

Finding points of origin in Scandinavia, on the other hand, was much easier. Thanks mostly to the meticulous recordkeeping of the Lutheran Church, we were able to trace ancestors back to Swedish and Norwegian farms in the seventeenth century. We have a list of places to visit in Kalmar in southern Sweden, Vännäs in north central Sweden, and Telemark in Norway. Though Telemark is in southern Norway, I've always had the dream of taking the Norwegian Coastal Steamer (hurtigruten) along the coast to the northern tip of Norway. Perhaps we can see some of Denmark and Finland as well.

Image via WikipediaI've always been around music. Violin lessons at age 4... piano at 8-9, French Horn in the band in school, choral groups and choirs, and guitar lessons as an adult. So I wish I could say that I play an instrument well... but the truth is that I don't. Although, if you count the human voice as an instrument, I can claim to play that one fairly well.

So I never really applied myself to music lessons, and, since you don't see me on stage somewhere, you can safely conclude that I don't have a virtuoso gift for playing an instrument.

But, I've always enjoyed listening to all kinds of music, and have that quiet yearning to make music of some kind. Fortunately, there is still time. And technology can help. (Of course, it can never replace real skill or knowledge -- but it can help cobble together enough of the components to produce something novel, something unique, something I could call my own.)

There are those who are content to listen to others' music. There are those who are satisfied with playing well the notes born of others' inner voices... and then there are those who desire to create something for others to play and listen to. I embrace all of these perspectives, but, lately, the creative urge, which started as a periodic nagging, has become louder and more steady, sometimes breaking into daydreams with a sharp jab, here and there interrupting my happy entropy with a needy urgency, and suddenly disrupting my happy coasting down the sometimes bumpy hill of middle-age ennui.

So I shall make some music before the end comes. I only hope some muse takes kindly to my intentions.

Posted by bakagaijin at 8:56 PM No comments: 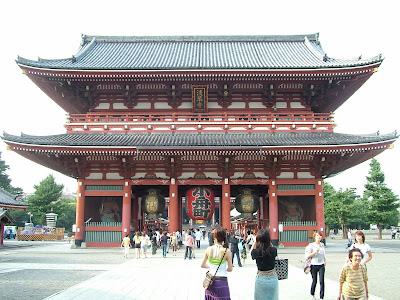 I think everyone should spend a year (or two, or more) away from the country of birth (or of growing-up). It broadens one's horizons, and lends a perspective that would otherwise be difficult to achieve.

Ideally, this should be to a place where the language and culture are different from those you are used to.

At one time, I could claim that I lived in Japan longer than I lived here in the USA. (Alas, this is no longer the case). Still, I would like to spend a year in various great cities of the world: Paris, Rome, Berlin, Prague... Doing that was a dream once. And still a possibility.

Posted by bakagaijin at 9:40 PM No comments:

Image via WikipediaI just returned from a two week voyage to Brisbane, Australia. It takes forever to get there from the US East Coast, and the time adjustment is really really bad (especially returning -- don't know why). But the little I saw of the Land Down Under caused me to immediately put a return trip to Oz in my top 100 "things to do" list.

Unfortunately, my weeks were taken up with work. Fortunately, the weekends were free, and the trip was paid for. I took complete advantage of this.

For my first weekend, I decided to stay close to Brisbane. As any good tourist should do, I booked a city tour which involved a guided tour of the city, a ride up the river (Brisbane is NOT on the coast -- but near it), a visit to a scenic overlook, and some time to see the local wildlife at a Koala sanctuary.

My second weekend, I took two day trips in two different directions. First, South to the Gold Coast and Surfers Paradise... to savor the glitz of over-commercialized sun-worship along a broad stretch of golden sand. Next, a boat ride to Moreton Island, a sand Island about 75 minutes from Brisbane by boat (kind of Northeast, I think). Here I was able to relax on the beach and fish off the pier. In the evening, at Tanglooma, I watched wild dolphins come in close to shore and eat fish offered by lines of chaperoned tourists.

Australia is huge -- around the size of the United States with a population of only 20 million. There is plenty to do, and I put some items on my list for the next visit:

Maybe if I had a month?

Posted by bakagaijin at 3:57 PM No comments:

Image via WikipediaThis might be the perfect time to start doing more for the environment. Even before the Live Earth concert, I have been exploring ways to cut down on energy use and increase recycling.

My first thought was to install solar power in my house, especially since the back of my house faces nearly due south... I did a lot of research and it turns out this is still pretty expensive.

Now this (going to CFl bulbs) does cost a bit, but there are several benefits. First, you are using less energy ( a lot less, per bulb to get equal brightness ). Second, since you are using less energy, your electric bill will be less. Third, these bulbs are supposed to last a LOT longer than the ones they are replacing (some even come with a warranty -- remember to save those receipts!!). A down-side is that the color and spectrum of light you get may not be the same as what you were getting with incandescents. But the most major down-side is that all of the CFl's I've seen seem to be packaged in excessive plastics -- just like everything else these days.

I still need to figure out what I'm going to do with the Honda Pilot... although, on the positive side, where I used to commute an hour and a half each way, I now walk down to my basement and telecommute. A lot less stress, and a lot less pollution!

Posted by bakagaijin at 2:16 PM No comments:

2. Do a Past Life Regression

Image via WikipediaPast Life Regression is a technique where a subject, under hypnosis, is taken back, or regressed, to a point in time before his/her birth.

For those who believe in reincarnation, PLR is said to be a way to experience past lives. Others believe that perhaps, rather than one's own past, PLR opens a channel for other spirits to speak through a person, or for a person to experience or to recall a collective memory. Or, of course, there is always the chance that it is completely hocus-pocus, and the "memories" are nothing more than our own memories from reading books or watching TV or movies, or even fabrications by an active imagination.

Nonetheless, the subject of Past Life Regression has always attracted me, and I would like to have it done to see what I can experience -- whether it is possible that I have had past lives or not.

I will have to research this subject more.